Why I Cried at Beauty And The Beast 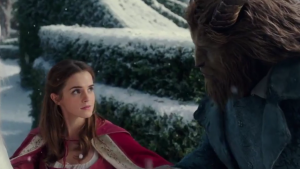 My son had turned one when Disney released its original Beauty And The Beast in 1991. I was enthralled with the fact that Belle – the main character in a mainstream animated movie – was intelligent. In fact, it was her primary characteristic! It gave me hope that my son would grow up in a different world than mine. in my world, my first boyfriend dumped me because my grades were higher than his, the biggest hope my parents had for their head-in-the-clouds daughter was to marry someone to take care of me, and bonuses and raises I earned through hard work and being smart in my former legal career were allocated to my male counterparts. In the world I had lived in, being intelligent, as a woman, had no value.

Andrew is now twenty-six and, unfortunately, incidents like those and a thousand others still frequently occur. Yet, it isn’t the same world as the one I birthed him into. In that world, we remained silent to avoid being driven out of our careers, marriages, and social connections. It was a man’s world and women were to be grateful for mere existence. That has changed. Now, women and men can speak of the unfairness, the injustice, and the counterproductiveness of treating women as lesser than men. And for those who remain voiceless, others have stepped up to speak for them – people like Emma Watson and her HeforShe campaign advancing gender equality.

So why did I cry as I watched Ms. Watson reprise the role of Belle? Because this Belle wasn’t simply an echo of the animation. Both by script and Ms. Watson’s portrayal, Belle has more depth: she is fearless and in control. Her father respects who she is and does not suggest she marry Gaston as did the animated Maurice. The story, of course, remains a romance, but this Belle’s adventures do not end with finding her prince. This Belle will seek out challenges in the “great wide somewhere” and now has an ally to cheer her on. Thank you, Disney, for the updated Belle.

Yet modern Belle, alone, didn’t bring me to tears. It’s just fiction, after all. It isn’t real. Yet I sat in a theater and watched this character brought to life by someone who has fearlessly used her intelligence and leveraged her status to speak for those who are not heard and advance the causes of social justice. That moved me more than my tear ducts could handle. Animated Belle revealed a potential for the world to be different, more accepting, less petty. Now fearless Belle and the actor who played her say nothing can stop that world from becoming a reality. Thank you, Ms. Watson.

And so I cried as I watched the new Beauty and the Beast. Of course, I loved the movie, just as I loved its animated precursor. Then again, “I want so much more than they’ve got planned” has been the refrain for my life. But that’s another story …

This entry was posted in Commentary and tagged Beauty And The Beast. Bookmark the permalink.