Getting Messy: Some Thoughts on the Good Samaritan

I am not a Biblical scholar. Not even close. In fact, I have a friend I ask when I need a Bible reference for my writing. Nevertheless, I find myself thinking about the parable of the Good Samaritan and how it applies to our lives today. If you are still reading this post, I ask that you read it for what it is: not commentary or interpretation of the Bible, but simply thoughts triggered by the parable.

I imagine that everyone raised Christian remembers the parable, and those who were not probably have some familiarity with it.  To paraphrase, Luke 10: 29-37, it goes like this:

Seeking a qualification on the instruction to love our neighbors, someone asks Jesus to define what is meant by “neighbor.” As usual, instead of giving a set of clearly defined rules and regulations that could be twisted for other purposes, Jesus relays a story of a traveler who was beaten, robbed and left half dead by the side of the road. A priest, and later a Levite – a man who would have had high level religious and political duties – went to the other side of the road and walked passed the man. A Samaritan – a member of a group despised by Jesus’s audience for desecrating their temple – stopped, tended to the man, and took him to an inn where he paid the innkeeper to continue the traveler’s care.

Most of us, including me, would like to believe we would behave like the Samaritan. Many of us, including me, believe we do behave that way by donating our time and money to worthy causes that assist those in need. We even give extra when a specific group is in need due to an unexpected disaster.  These are undoubtedly positive actions and provide aid to strangers, but they merely cast us in the roles of the priest and Levite in the story – not as the Good Samaritan.

Why do I say that?  Because in doing those very good deeds, we don’t do what the Samaritan did – make a one-on-one human connection. We don’t risk getting messy by touching someone – by actually connecting with a stranger who is not like us. And by not taking that risk, we miss the point. 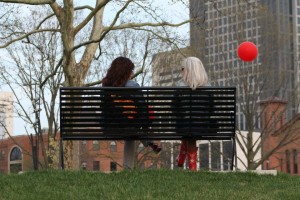 I have continued thinking about the experience  of participating in Kate Collins’ Talk to Strangers last month (see my previous post for a description). Perhaps that is the reason I was thinking about the Good Samaritan this morning. Collins created an experience that forced us to take the risk of reaching out to someone we wouldn’t normally associate with.  We had to listen to who the other person was – that was the primary requirement of the exercise. That act of listening formed a connection that wasn’t there before.

I’ve had this experience before. One of my most valued relationships is with a person I had no business talking to. We appeared to be ideological opposites in every respect. Yet, for some reason, we didn’t just talk, we listened, and in doing so, we discovered ideas behind the disparate words we use that are far more similar than we would have guessed. We also learned to understand and respect the areas where we differ. The result didn’t just benefit the goal of our dialogue, it improved us.

I fail the Good Samaritan test on a daily basis – I walk through the grocery store or down the street so absorbed in myself or my duties that I barely see the people around me. Today, I will do my best to be different. I will try to raise the spirits of others rather than my own, to help others rather than help myself, and to listen rather than talk. I’m sure I won’t do it well – after all, it’s safer to remain insular in a world where differences are shouted down and waved like flags through the isolation of “social” media. But still, I am going to try.

Human connections are messy. It is HARD to listen to another person. Perhaps it was easier for the Samaritan because the needs of the traveler were obvious without words getting in the way of hearing with his heart. In the end, I suppose that’s what this post is about – we all need to hear with our hearts. Where our brains see divisions, our hearts hear connections. Perhaps we should get messy and listen more often.

This entry was posted in Commentary, Myself and I and tagged connections, Good Samaritan, Kate Collins, Talk to Strangers. Bookmark the permalink.