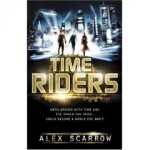 Okay, so this isn’t exactly a new book.  It was published almost two years ago, and I’ve had it for over a year, intending to read it.  Well, I finally have.  And???

It’s a good book.  I give it three-and-a-half out of five.  The story is good, three teens from different times are plucked from their own time lines at the moment of death and placed in a time bubble in New York City. There they witness the same two days over and over, watching for the slightest alteration that will demonstrate someone has altered the proper time line, and they must go back in time to when the alteration occurs and fix it.

The plot is good and the obstacles – Nazis and zombies – well played. It’s an overall worthwhile read.  Lots of action. Good imagery so that you feel like you are with the characters under attack in the White House, or in the muddy trench at the detention camp, or being watched from the zombies inhabiting the buildings of NYC.

So why not more stars?  Because the antagonist’s character was better developed than anyone else’s.  Perhaps he was misguided, but he was striving for a better world than the one that he lived in.  And once he had accomplished that, he went insane.  Not insane from guilt over what he had done, just nuts. Sure that made him someone who was dangerous, but it didn’t set him up as an ultimate evil in a book filled with Nazis and zombies.  On the other hand, the three main characters were not well developed.  The beginning of the book was promising in that regard, but once they had been extracted from their original times and met each other, nothing else about them was revealed.  They did not grow or develop in the course of the book and when something devastating happens to one of them, my emotion response was “Meh.  She was getting rather whiny.”

Despite this, the plot still carries this book.  It’s interesting, entertaining and worth a read.  Available at Amazon, and Barnes & Noble.