Catching up with Author Michael Williams

I’m on vacation this week, taking a well-deserved break while awaiting the release of Origins, the third book in the Rothston Series, which comes out later this month. It’s been a hectic summer, followed by an even more hectic fall, so this vacation gives me an opportunity to sit back and catch up with friends. This morning, I’ve ran into one of my favorites, author Michael Williams, who agreed to an interview so that I can learn a bit more about his writing.

Good morning, Michael!  How are you?

I’m doing well, thanks, but evidently not as good as you—wrapping up the third novel! congratulations!   I always get sick—no kidding, physically sick—upon finishing a book.  It’s as though some kind of pent-up bad juba is released all of a sudden. I hope you don’t suffer the authorial psychosomatics, and that you’ll enjoy better health in the hiatus. I understand there’s a fourth in the offing.

We met at a writer’s event about three years ago, and I remember thinking, “Wow, this guy is a serious author.” Since then, I’ve read some of your novels and am amazed by your poetic use of language in creating settings and mood. I’d say you don’t write for the bubble-gum crowd.

Early on I realized no bubble gum would be dispensed. I had a reviewer observe once that my most recent book, Vine: An Urban Legend, was “not for the casual reader.”  He meant it as description rather than as an evaluation, but I took it as something accurate, in ways a badge of honor. 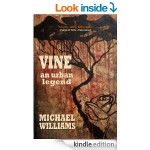 I enjoyed Vine and agree with that observation. It made me actively think while I read, but at the same time, the settings are very accessible. I hate being pinned down to a specific genre, but we have to be able to describe our novels, I’m going to ask you the question I dread: how do you describe the type of novel you write?

I suppose what I do is a kind of old-school magical realism.  Familiar places, realistically imagined and presented, but with an interweaving of mythology and the supernatural.  I use the magic both literally and metaphorically in the stories, because I’m convinced that the gods (and what they meant) still move beneath and around the surface of things.

Sort of like how I use “adept attributes” in the Rothston Series as a fairly explicit metaphor for the effect individuals have on each other, but you use those techniques in a much more subtle and intricate manner.

Since things happen “beneath and around the surface” of the stories, I tend to trust that my readers will be sharp, attentive, and in love with the idea of looking at a story from a number of sides, facets, angles, in order to dwell with the possibility that the tale tells several things at once.  I also love a reader who sees the alchemy of everyday things—how the poetry in each person’s consciousness transmutes base metal into gold.

You know, I demand novels that have more to them than just a romping story. If the superficial story is all there is, the novel doesn’t hold my interest. So, am I the kind of reader you write for?

I hear most writers talk about their “duty to the reader,” and it is important (if not a little sanctimonious now and then—‘fess up that you write because you love words and characters and stories, for god’s sake, because there are a number of ways to help people that are more vital and immediate than simply giving them a good read).  But your duty to the readers shouldn’t necessarily end with giving them what they want: it should involve going with them on a journey of exploration and expansion of the world you all see—you and your readers, all traveling together.  In the words of George Clinton, visionary leader of Parliament Funkadelic, “Free your mind, and your ass will follow.”  I like a story that starts me in places I either know or can recognize, then transports me into the rich and strange, the unfamiliar, puts my back on my heels so that I can regard the new place both as fact and as metaphor, so that I can read the world around me with an eye to its mystery and depth and intricacy.  So I can read the world as poem.

I agree that authors should write what moves them, but after I wrote Foreseen, agents and publishers told me to place the characters in high school even though the story would be more than far-fetched. Others said I needed to keep the affection between the characters on a superficial (and expressly physical) romance level. Having been told that writers need to do whatever their publishers and agents tell them to do, I actually tried those changes, only to find that I couldn’t stand reading it! It became trite – not at all what I was trying to convey – and so I reworked it back to what I had wanted originally. I’ve burned and deleted those altered drafts, but another author had her mystery series picked up by Penguin on the condition that she rewrite them to include a ghost as a main character. You’ve been interacting with the publishing world much longer than I have. Is this a change or have they always tried to change what the author wanted to write?

It’s not so much a change in the publishing world.  At least not in my time or with the publishing houses I’ve moved through. They’ve always been businesses, of course.  Still…I think there was a time, though, when publishers felt more of a duty to present good writing to their readers, and that has changed much more toward simply making money.  Nowadays I can’t imagine too many major publishers saying, “Let’s take a chance on this one.”  Small presses are the venue nowadays for the books that push the envelope, but ironically the small presses are understandably struggling to stay alive, so many of them tend toward easy reading that gives readers what they expect, like 90% of the young adult fiction, other books like 50 Shades, or all those Twilight knockoffs.  If you try to write something other than what’s readily marketable, expect a much more difficult (but interesting) road.

I have to admit that having to rewrite Foreseen to reincorporate the elements I wanted improved it, and, since that was my first novel, I learned a lot in the process. Of course, I’d say I’d learned a lot about writing through each novel since, as well.

Don’t stop learning from your work, even from what seem like disaster in the process. Back in the mid-1990s I was working on a novel called Allamanda and midway through the first draft.  It was when I was more stupid about computers and when computers were more stupid.  A virus crashed my whole damned apparatus and I lost 80 pages of a draft.  80 pages.  I know some people do that in a couple of days, but that was at least 2 weeks work for me back then (now I write even more slowly).  I was in a terrible state, lamenting the demise of the novel as I knew it, until my wife said to me that I’d just have to write another 80 pages better than the ones I’d lost.

I think I did write better pages.  I wrote them longhand, which was something I hadn’t done in ages, and it was more like touching the words, feeling them come to life at the end of a pencil.  So I learned about varying the method when you face a setback or come to an impasse, but I learned something more: nothing I write is etched in stone.  The words and the story can always change.  Writing is, bottom line, layer after layer of revision, until you reach a point that your judgment or intuition or experience tells you not that it’s finished nor even as good as you can make it (because “good as you can make it” would take to the end of your days) but it’s simply reached a point where it’s time to let it go.  Hope for the next set of eyes to be creative and forgiving.  But never think the job was done.

The last part of Origins (the prologue) was written on a series of 3×6 note paper during a rather dull meeting. The timing, the paper, and the long-hand all played a role in getting it right.

There’s something about longhand, isn’t there?  Maybe it’s just writer’s cramp, but it does indeed shift your relationship to the words you put on the page. And sometimes radical shifts spark your thoughts, help you see what you’re doing from a different angle, and thereby make the book better. 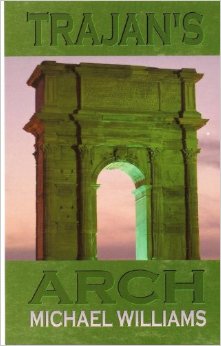 Having read Vine and Trajan’s Arch, I’m very interested in what you’re working on now. It’s related to the other two novels, right?

It is. Vine and Trajan’s Arch are set in the same Midwest American town, and some of the same characters slip from one book to the other.  The novel I’m working on, Ghost Month, brings together characters from both the previous books, building another story through which they can move.  It’s not the third book in a trilogy, which to me implies a story arc that covers three volumes, but the third in a triad—self-contained stories that find common ground by a relation of characters, settings, and incidents.

This past year, you also did some traveling and blogged your experiences. I enjoyed your descriptions of life in Italy, and loved the description of the fittingly Kafka-esque adventure in Prague attempting to get to the Kafka museum. You have more travel writing planned, don’t you?

I am also working on a book of travel writing, covering a number of European trips and pilgrimages (more literary pilgrimages than spiritual, though I’ve never been able to disconnect the two). Another trip to Italy is in the offing, and again with a number of side roads I intend to write about. If all goes well, I expect the book’s release in 2015.

You and I could talk for hours – come to think of it, we’ve done that on more than a few occasions!  Nevertheless, you have students to teach, and I have a vacation to get on with. Thanks for talking on my blog this morning. Give your wonderful wife a hug for me, and I want to read the new book – write faster! (That was facetious – write as long as it takes, but no longer.) Thanks!

This entry was posted in Uncategorized. Bookmark the permalink.