This morning, another author stopped by for an interview. Meet Iscah, the writer of fantasy stories.

Good morning, Iscah!  I’ve already mentioned that you write fantasy, but that’s a bit simplistic to describe your work, isn’t it?

I write in many genres, but a majority of what I’m working on now is some level of fantasy.  Though the specific flavor will vary from fable to adventure to epic to surreal to you only think this fantasy but actually it’s something else entirely.

My hope is to appeal to a broad audience and reader demographic.  I want the person who’s never picked up a fantasy novel to enjoy the story as much the hardcore fantasy fan.  I also try to set up the story in layers.  There’s the “ride” where you can just sit back and enjoy the surface adventure.  But there’s also metaphor and Easter eggs to discover if you’re looking for them.  My fans seems to be pretty balanced gender wise, and I like that.

It sounds like our fan-bases have a lot in common, although I would describe my current series as more supernatural thriller than fantasy or science fiction which is how it’s often labeled. But then again, I find the standard genres too confining for me. I take it you do as well.

I genre jump because I bore easily.  Some writers write with sort of a jazz formula, same basic plot but with a few surprising yet comfortable variations, and I very much enjoy reading some of those.  But I’m an Indie pop, classical, folkrock sort of writer who’s quite willing to experiment with a little rap and reggae and see what happens.

I like the music analogy. Some great music has come from mixing things up. You current have Seventh Night and a prequel called Before the Fairytale: The Girl With No Name available on Amazon, and you have another prequel, Horse Feathers available online at no cost for a few more days. Tell us more about Seventh Night. 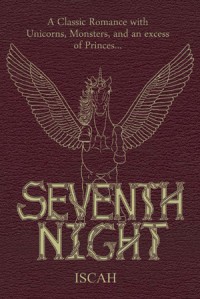 Once, a boy fell in love with a girl not long before a princess married a charming prince, and if the boy had been the prince or the girl had not been the princess, this might have been a simple fairytale romance.

In a land where unicorns are commonplace, life can start resembling a storybook.  Everyone wants a happily ever after, but sometimes true love requires sacrifices…

Most writers have stories about trip-ups along the way to creating a novel – even if some want their readers to believe the process was smooth as silk. Do you have any stories you want to share?

Originally Seventh Night was going to be called The Magician’s Apprentice and focused on Phillip as the main character, but then I found a book with that title in the store.  Many of my favorite fairytales are named after the princess, and I went with that idea.  However my title character was unconscious for over half the book, so I revised her section, gave her stuff to do, and like the story much better for it.  It’s really an ensemble adventure now.

Let’s give the readers links to follow you and find out more about upcoming books and appearances.

I noticed you also have a Deviant Art page that includes a map for the Horse Feathers’ journey.

I want to thank you for stopping by and telling us about your writing. Before you go, is there any news you want to share?

In November, I’ll be starting a new serial.

That’s great! You’ll have to come back and tell us about it when it’s ready.

This entry was posted in Uncategorized. Bookmark the permalink.