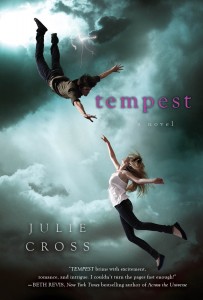 I give Tempest a 4 out of 5.  That means it was a good book, kept me entertained and left me thinking about it for a bit afterwards, but not quite gushing about it.

In the interest of full disclosure, I believe my novel, Foreseen, was declined by an editor a couple years ago because of Tempest. Certainly, that was never intended by either Julie Cross or myself. It’s just one of those things that happens. We both have novels about a college kid who discovers he or she has some special power – time travel in the case of Tempest; mind-reading in Foreseen.  The editor in question had already signed Tempest, and didn’t think it made sense to have two similar books coming out around the same time. He never told me the name of the book that bumped Foreseen, but I was pretty sure it was Tempest. So when it was released in January, 2012, needless to say, I wanted to read it, and they do have similarities in tone and story. Now, on to the review:

Kudos to Julie Cross for coming up with an innovative way to incorporate time travel into what is otherwise fairly normal teen life. In Tempest, nineteen-year-old Jackson Meyer has recently found he can jump back in time, but just by a little bit. He can’t change the course of events, and only stays a little bit, then is back in his present time,  2009 (presumably the year when Julie Cross wrote the novel). That all changes when his girlfriend, Holly, is shot before his eyes, and he finds himself back in 2007, unable to get back to his present. And now, in 2007, it looks like he might be able to change things as well. So he befriends his girlfriend and her friends as they were in high school, in an effort to figure out what has happened and get back where he belongs.

The story that follows is complex and intriguing. It kept me reading to find out the answer to the questions that come up early in the novel.  I’ve seen reviews that mention that the characters are flat, and I will agree that Jackson Meyer is almost a caricature at first, but urge the readers not to give up because of that.  That is how Jackson sees himself at the beginning of the book. But over the course of the story, he grows, discovering who he is on more than one level and more importantly, realizing what is important to him.

My only serious concern with the novel was the lack of descriptions.  There is very little to give me the look, smell, or feel of any of the places in the book.  At times, particularly near the end, the missing description made the action difficult to follow.  But otherwise, I recommend Tempest. It’s an excellent debut novel.